Hi everyone, here is a sneak peek of a new print titled "Blink and Seek" that I will be releasing this July for San Diego Comic Con. To go back in time and play with these young Whovians would be a dream come true! 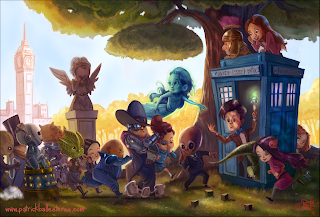 Not only will this piece make its debut at the San Diego Comic Con but also you will get a chance to see it in Brooklyn, New York, at the Bottleneck Gallery for their upcoming exhibit "Where Is My Mind?"

PREORDER
The cost of the print is $20 and measures 12"x18" so make sure to drop by Artist Alley DD-08 to pick yours up before they are gone! If you cannot make it to San Diego, well guess what?....You can preorder your print now by clicking here. I have a few more things in the works that I will be releasing as Comic Con gets closer. Information will posted here, Facebook, Instagram, and Twitter so keep your eyes peeled. Thanks again for stopping by and I hope you enjoy the new piece.
imagined by Patrick Ballesteros

man! That is some crazy ass rendering! :)

Hey, my friend! This is really cool, although I must admit I haven't yet joined the ranks of Dr. Who fans. I keep hearing about it though. Don't know if I'll make it down to the con this year, but if I do, hopefully we can catch up for a bit. I know it'll be crazy though!

Nikolas-Hahaha, thanks man. It's a blessing and a curse sometimes to render it that much.

Mauricio-Yea its a really good show. Really nice character development. It's kooky but it works! Hopefully you do make it out to con, would be good to catch up my man!

Who is the ghost?

She was the Siren that turned out to be artificial intelligence for an aline ship. It was from the Pirate ship episode where if someone drew blood they were taken away.

Patrick Ballesteros
Los Angeles, California, United States
Not only do I make funny pictures but also I create concept art and visual development for the video game, animation, and film industries.

visitors from around the world

thank you for visiting